Walking through the revolving doors into the UN building, my eyes moved a million miles a second to take in each new sight around me. From the sight of the UN symbol on doors, to the beautiful view of the Hudson river from the Qatar Lounge, I drank in the surrealness of being 16 years old, and attending the 2019 UN High Level Political Forum in New York city. I was accompanied by two of my friends Kathryn, and Rhoshini who had done Model UN at school, and I can only imagine the awe they felt as they first walked onto the balcony of Conference room 4 where the meeting was in progress below. Our trip to the UN was made possible with the support of the Global Co Lab Network who we represented at the United Nations along with the Eco Teen Action Network. 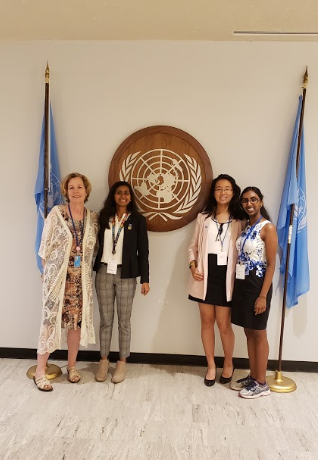 The first day we went to the UN we did not get to watch the actual meeting, and so we were extremely disappointed. However, we soon realized that the meetings were dry, and boring compared to the thought-provoking side events. The most notable of these side-events was the impact of climate change on Small Island Developing States (SIDS). Several notable experts in the field of climate change spoke, but the statements of a young person making change in the Marshall Islands resonated with us the most. We talked about the difference between a small island and a small island developing state in that the latter is more impoverished and have a set of their own unique vulnerabilities: their developing nature and the tragic effects of climate change. A representative of PeaceBoat, an initiative that takes passionate climate activists around the world to SIDS and helps the residents improve their quality of life, talked about the importance of the Sustainable Development Goals (SDGs) and how PeaceBoat and EcoShip are educating the world on these goals. Back to Selina Leem from the Marshall Islands, her story made us realize the importance of intergenerational dialogue and a mixture of science and tradition in the fight against climate change. The panelists at this event were extremely well-researched and qualified, but they had stories that were worth sharing and will truly change the world.

The most surreal part of the entire UN trip was being offered to speak during a United Nations meeting on the last day we were there. The meeting discussed climate change, and the Major Group For Children and Youth (MGCY) wanted a young person to deliver their intervention (short speech during a UN meeting). I was able to sit at the MGCY’s seat on the UN floor during the meeting, but I was never able to speak because there was not enough time. Even though I did not get to speak during the meeting, being able to sit in on an actual UN meeting on the floor instead of the balcony was enough to make me feel inspired and awed at the amazing opportunity.

Not only did we enjoy the UN meetings and side events but we also got a taste of what it is like to live in New York City. We stayed in a small apartment with a micro sized bathroom that four people shared, but once we got used to it, the apartment definitely felt like home. Great restaurants also came with staying in New York.

All in all, although the HLPF meetings were the actual UN meetings, we learned so much more from the numerous side events taking place in and around the UN. The entire 4 day experience was fun, eye opening, and inspiring. My friends and I are forever grateful to the Global Co Lab for making this trip possible.