Food is inextricably linked to a great philosophical question that humanity has fought over since its inception: are we equal? We all have different aspirations, different characteristics, different humor, and different livelihoods. But aside from inhaling oxygen, our food is the only consumable thing we truly need and actually share. Food is absolutely fundamental to our daily lives and takes so many different forms. It can be broad and basic, like white bread, or customized to the whims and demands of the world’s fanciest eaters, like vegan beef bourguignon (a real dish!). Food is a daily reminder that we are all human beings that need to eat.

For me, food has always been a central part of my understanding of life. No, I didn’t grow up on a farm, although I have a lot of farmer blood in me. My food journey began with delivering Meals on Wheels at age 3 when I was dragged along by a mother wanting her son to get an expanded perspective of life. Just past my toddler years, I saw need in places I would have never expected. In homes that looked like they were taken straight out of Gone with the Wind, there were seniors who without our help would have limited access to healthy meals. While delivering meals, I learned not just about hidden need and limited access to food, but about the universality of food as well. Here, food was the binding connection between our generations. There would never be any discussion during our deliveries of income, race, or gender, and no divisive talk of politics or religion. Just food being delivered, appreciated, and enjoyed by those that needed it.

And food doesn’t just equalize us as people in the United States, it transcends cultures and borders. I have seen this first-hand while having the great fortune to travel around the world. In Morocco, I dined on a traditional chicken tagine in Casablanca with wedding celebrators. Stegt flæsk, fried, crispy, and porky Danish delight, was the preferred dish of my host family while on a student exchange in Denmark. Not only borders, but languages as well. When ill while traveling in Costa Rica, I experienced the best vegetable soup in my lifetime, prepared by the single mother who owned the accommodations where I stayed. Alone, this would be a great example of cross-cultural connection, but it is amplified by the fact that neither of us spoke each other’s language. She knew I was in need and helped me in the best way she could, with food. 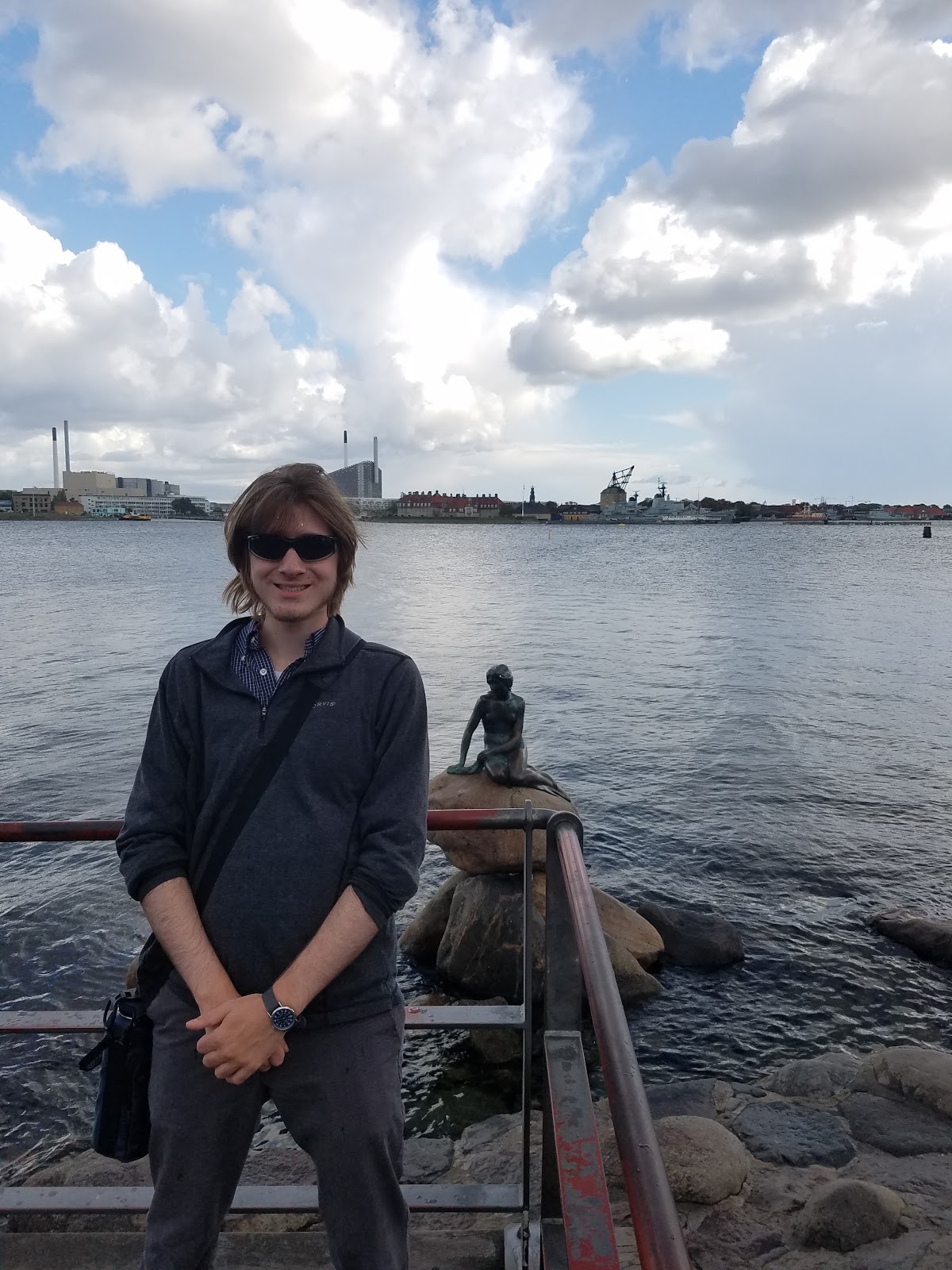 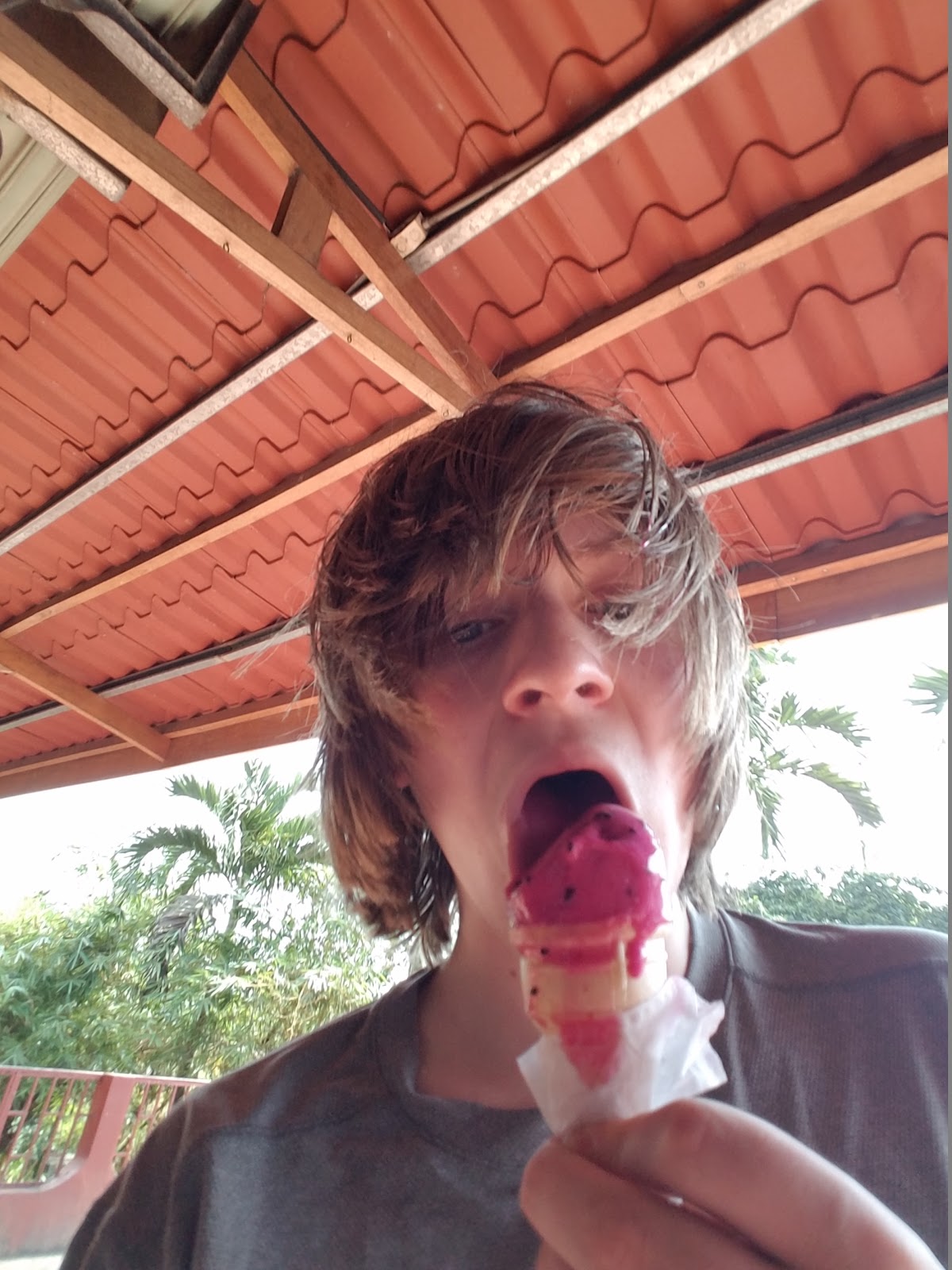 However, even though the need for food equalizes us as humans, hundreds of millions of humans around the world lack equal access to it. If we do nothing, that gap will only continue to worsen, as we add an estimated 3 billion people to the planet by 2050. Not to mention the increase in greenhouse gases that result from our efforts to feed the world. At this point, it’s not enough to say that there’s a problem, but instead, realize that we must come up with solutions. So I was very excited to hear that the World Resources Institute (WRI) was holding a symposium on their new sustainable food report and planned to attend. Their report is called: “Creating a Sustainable Food Future - A Menu of Solutions to Feed Nearly 10 Billion People by 2050.” It brings depth, nuance, and most importantly practicality to one of the world’s most pressing and multifaceted issues. The report lays out 22 “menu” items, ranging from the seemingly simple reduction of food waste to the clearly complex reduction of greenhouse gas emissions through improving nitrogen-use-efficiency in fertilizer. All menu items are organized into 5 courses: reducing demand growth, increasing food production without land, protecting natural ecosystems, increasing fish supply, and reducing agricultural emissions. 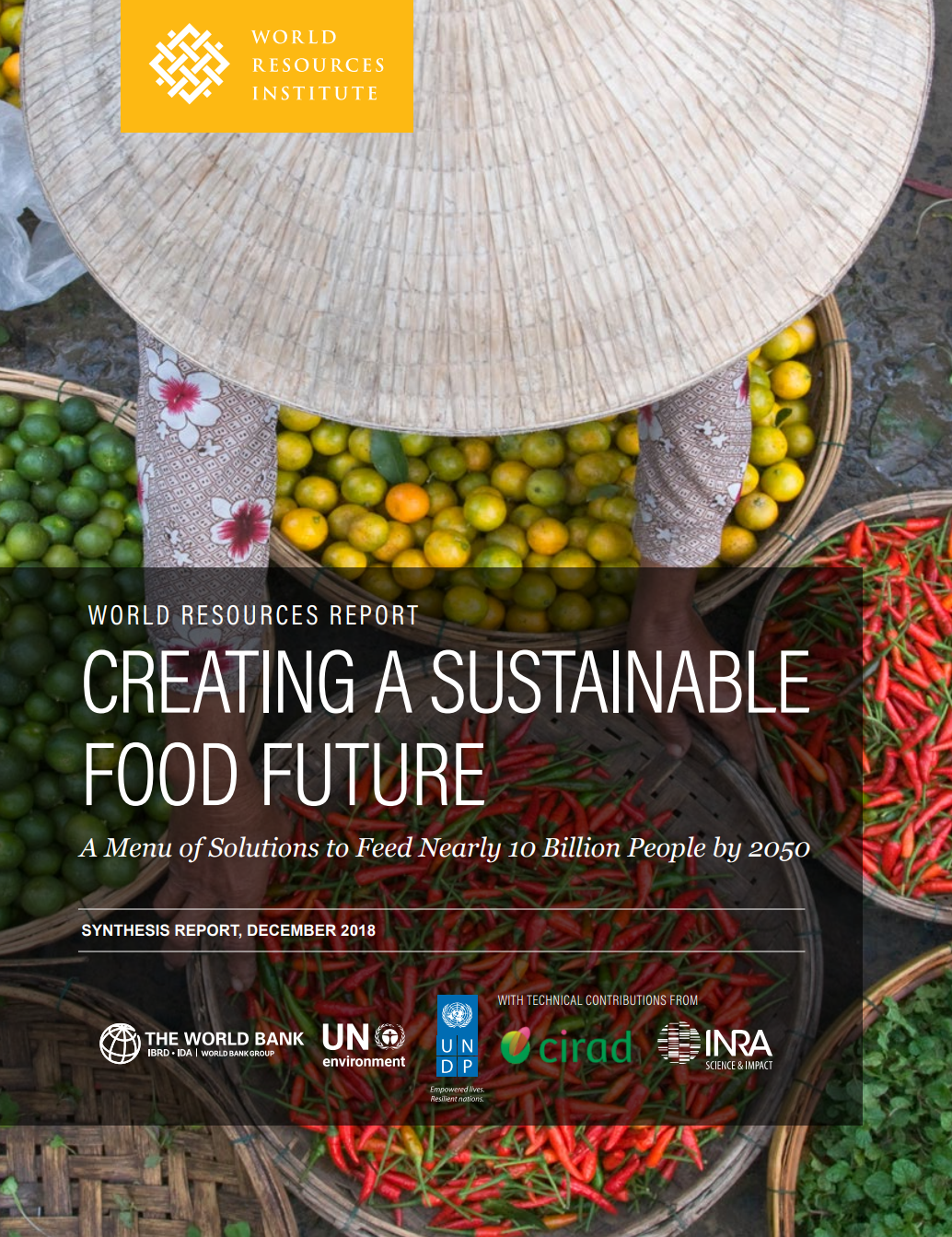 The symposium itself was fascinating. WRI brought together experts from other think tanks, large corporations, and sustainability advocates all to discuss the next steps for sustainable food. Speakers discussed the role of governmental action, especially subsidies, in changing agriculture for the better. They delved into the need for swift action in all parts of the supply-chain and highlighted the role that technology advancements must have in that change. And it was all topped off by a tasting of the new Impossible Burger, now sold nationally as an Impossible Slider or Whopper.

Yet the biggest impact the WRI report had on me was how highly personal each section of the report seemed. In the demand course, I couldn’t help but think about the efforts I helped spearhead at my high school to study and reduce food waste by 30%. Similarly, as I continued through the demand course, WRI outlines a goal to shift diet to a more sustainable and healthier level. What is relieving about this diet is the absence of guilt they place on eating meat. Such a goal doesn’t mean they advocate red meat at every meal, nor do they suggest everyone become a vegan. Instead, it means reducing the big meat contributors to GHGs (cow, goat, sheep), and choosing alternative meats (poultry, pork, seafood) or meat alternatives (Beyond Meat, Impossible Burgers). The point is that everyone can improve the health of their diet, while also helping the health of the planet. 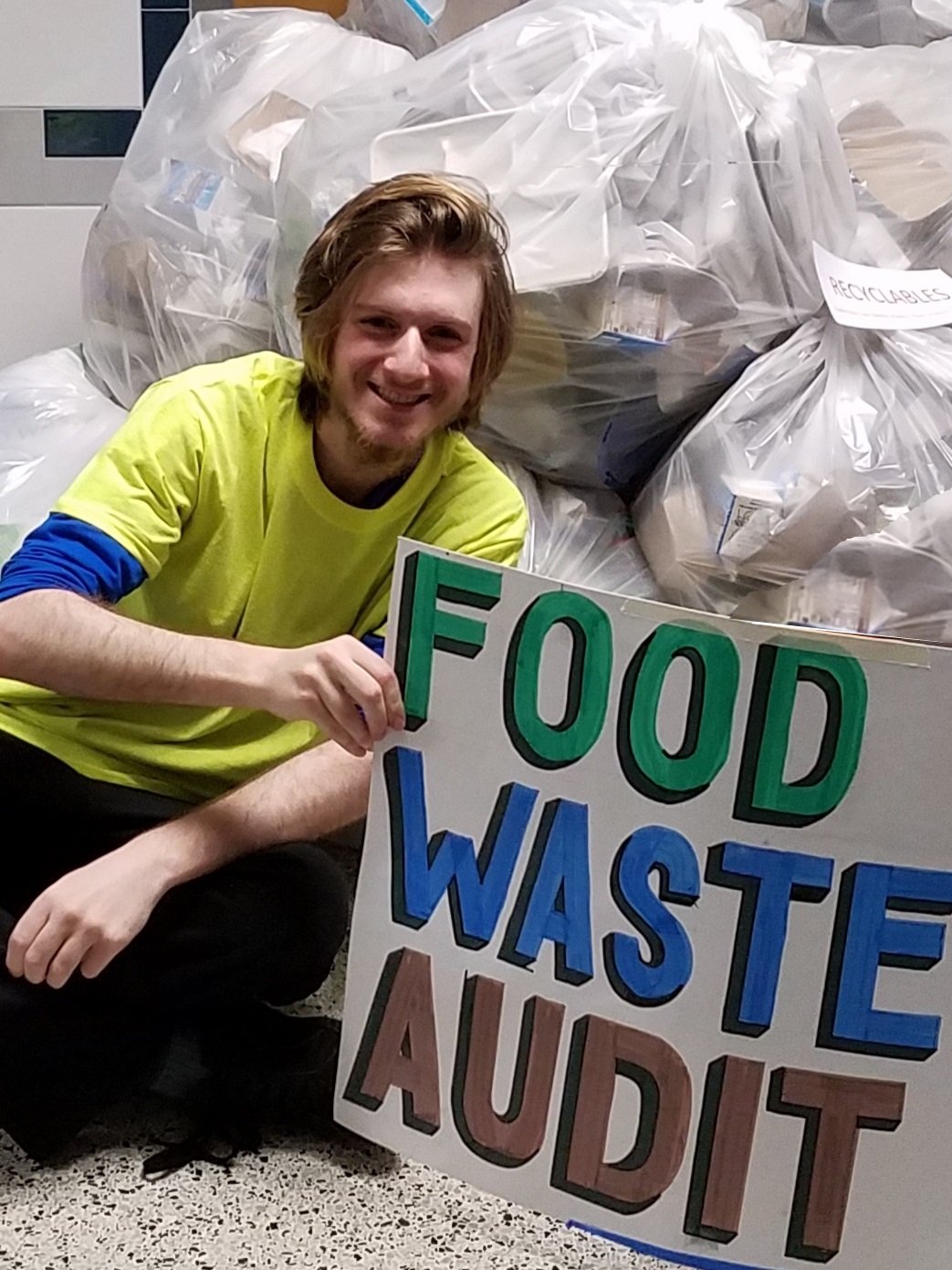 I found the second course missing an important component about improving productivity - age. The goal of improving soil and water management and productivity of livestock is incredibly noble, but impractical in some areas unless you have fresh labor. West Virginia is both ground-zero for my family and for this problem. My distant cousins have definitely passed the normal retirement age but still work what they can of their farm. And this isn’t unusual in a state where the average age of farmers is just over 56 years. Not to imply that golden-year farmers are not incredibly efficient (they are), but many farmers including my family can’t do as much as younger folks can. WRI is right that we have the land to feed the world, but part of improving our productivity needs to be revising our labor pool. 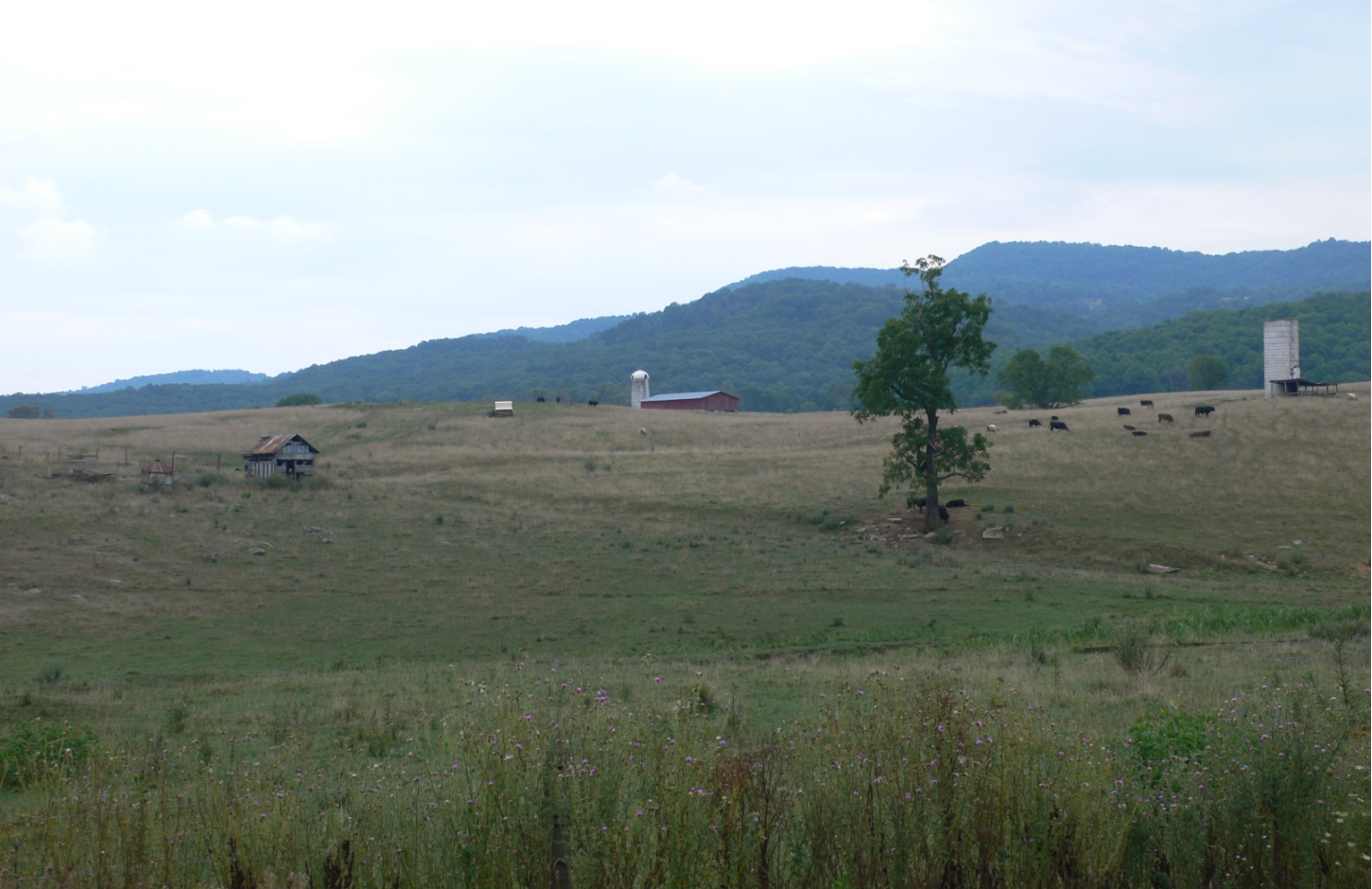 Course three aligns itself with the Minnesotan side of my family. Generations have lived on my extended family’s 240 acres in the middle of the state. But with a mass exodus from the farming region came new opportunities for reviving old ecosystems. The Minnesota Department of Natural Resources offers a stipend for farmers to lay fallow part, most, or all of their land. The DNR’s objective is to allow native species like goblin fern or ram’s-head lady’s slipper to prosper in areas where it had once flourished. Seeing both the ecological and financial benefits of the fallow-land stipend, my family decided to participate in the program. By restoring ecological areas across the state, the DNR is preserving ecosystems, all while Minnesota consistently ranks at the top for agricultural production. Minnesota offers a model of how to preserve and protect ecosystems and feed current and future generations. 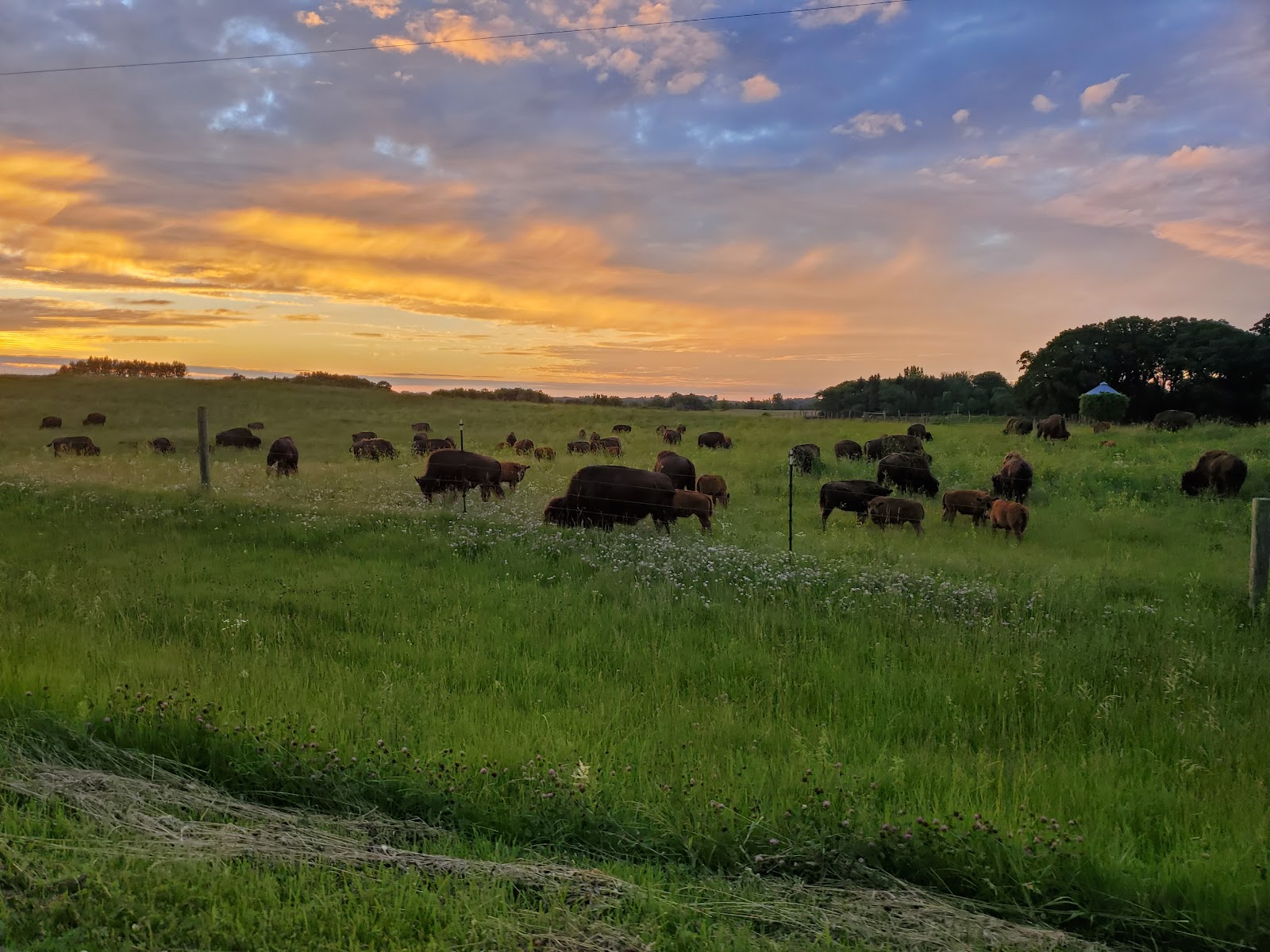 Fishing is a central part of life in Alaska, as it is for many coastal regions across the country. Over the years, Alaska has been home for my parents, my siblings, and my cousins, one of whom is a licensed fishing captain on the Alaskan coast. Course four discusses this pillar of Alaskan life. Fishing and seafood make up over ten percent of the Alaskan economy, translating to billions of dollars, nearly 100,000 jobs, and 5.6 billion pounds of seafood harvest. Still, Alaska is only a microcosm of the global fish situation. WRI projects an increased fish demand of over 40 million tons, which can’t be met by wild fish alone. Farmed “aquaculture” fish will need to make up the gap while improving its environmental quality and land usage. Stabilizing yields of wild-caught fish while decreasing overfishing is crucial to the future of Alaska and so many other fishing communities.

Rounding off the courses is the reduction of GHGs from agricultural production. In my Environmental Science class, I learned about Polyface Farms, in my own home state of Virginia. Polyface has established a sustainable farming model, and an economic one as well. Sustainability there means everything from promoting grass to absorb all manure left by animals to increasing fertilizer efficiency through a deep bedding of wood chips to lock in all the nutrients within the soil. What Polyface teaches is that making an environmental difference and a profit aren’t mutually exclusive. There are real solutions for reducing, and hopefully eliminating or off-setting, the greenhouse gas emissions associated with food production. If a rural Virginia farm can do this for nearly 60-years, then newer high-tech farms can surely incorporate sustainability into their practices.

“Thirty planting seasons remain until 2050.” Dr. Laura Tuck, Vice President of Sustainable Development at the World Bank, made this issue real to many of us attending WRI’s symposium with those words. There is no room for error and no time to waste. If we lose a planting season due to drought, flood, or insect infestation, we cannot shrug it off and still meet our food demands. 2050 is not an abstract, distant, and futuristic year in which technology will solve everything. 2050 is barrelling toward us. But we have to remain optimistic and implement practical solutions. Contrary to current perceptions and popular belief, there is a lot to be hopeful for in the realm of food security. 30 years ago, 1 billion of the Earth’s 5.3 billion humans were malnourished. Today, only 700 million are considered malnourished, even though our population has boomed to 7.6 billion people. To be clear, that’s a 30% reduction in food insecurity, while our population has increased by 42%. We can feed the world. We must.

Food is humanity’s equalizer. It’s production, preparation, transportation, and consumption unite us as a species. Food must remain our equalizing force. So, since food can’t be an advocate on its own, we must be advocates for our food. Feeding the world means fighting for a better one, and that’s exactly what we must do.