Home / Blog / How to foster food sustainability in your school, community, and beyond!

How to foster food sustainability in your school, community, and beyond!

Shades of green surrounded us as Garreth and I descended a trail in Shenandoah National Park towards one of several waterfalls along our eight-mile route. We had arrived with several other of our friends the previous and a few parents the previous day and observed the leaves of the trees around us coated with droplets of rain that had been falling intermittently throughout the day. As rising seniors, I started our summer conversation with future plans as does any stranger when he hears that you are between the ages of 14 and 20. Unlike most of our peers, however, Garreth was focused on the actions he would take during senior year to improve our school community rather than his professional trajectory afterwards. “Food and Hunger Task Force” echoed through my mind as Garreth explained his vision for uniting the school community around realization of the United Nations’ second Sustainable Development Goal. Food waste served as our principal concern and I shared my experience working with DC Central Kitchen and their efforts to promote economic development through food, while eliminating waste. My recent interaction with CEO Michael Curtin echoed through my mind; “There’s no reason why you can't start what we’re doing here in your schools and communities.”

We first needed to understand the impact of George C. Marshall High School’s 2,173 students in areas such as food waste. Holding a food waste audit on November 20, we instructed students to place their food waste in the trash can corresponding to their class and we added a miscellaneous bin for faculty and staff. With only 60% of the student body present on the Tuesday before Thanksgiving Break, we found that Marshall wasted more than 100 pounds of food, with the freshman class recording the most waste at 23 pounds. Inquiring with the school registrar led us to find that 17% of our school population receives free or reduced-price lunch. The variance of our food waste and our school’s need led Garreth and I to embark on different paths in achieving the Task Force’s goal of reducing food waste and insecurity.

Involve as many people and organizations as possible

At the onset of senior year, I did not envision leading five different clubs and honor societies. It just sort of happened that way. I thought I love French and Social Studies and English and I’m already leading Octagon and Writing Center, so why not add on a few more? While such a decision led to many nights organizing Google Classroom announcements and planning events, involvement in many organizations facilitated their partnership in Food and Hunger Task Force events as well as others such as a Mental Health Seminar and Meditation.

My first project was The Share Table, a table in front of the trash cans and recycling bins on which students may place unopened packages and uneaten fruits and vegetables. After many meetings with leaders of the Second Story, Octagon Club, Key Club, Marshall PTSA, National Honor Society, Student Government Association, and the purchasing of a small refrigerator with Octagon Club funds, I implemented the Share Table on March 1st. Donations from the table would be taken by PTSA volunteers on Tuesday mornings to the teen shelter Second Story’s office to be given to at-risk youth. Throughout the year, National Honor Society members, and volunteers from Octagon, Key Club and Marshall’s leadership class staffed the table making announcements about eligible food and encouraging donations. We recovered nearly 90 pounds of food in the Share Table’s first year. 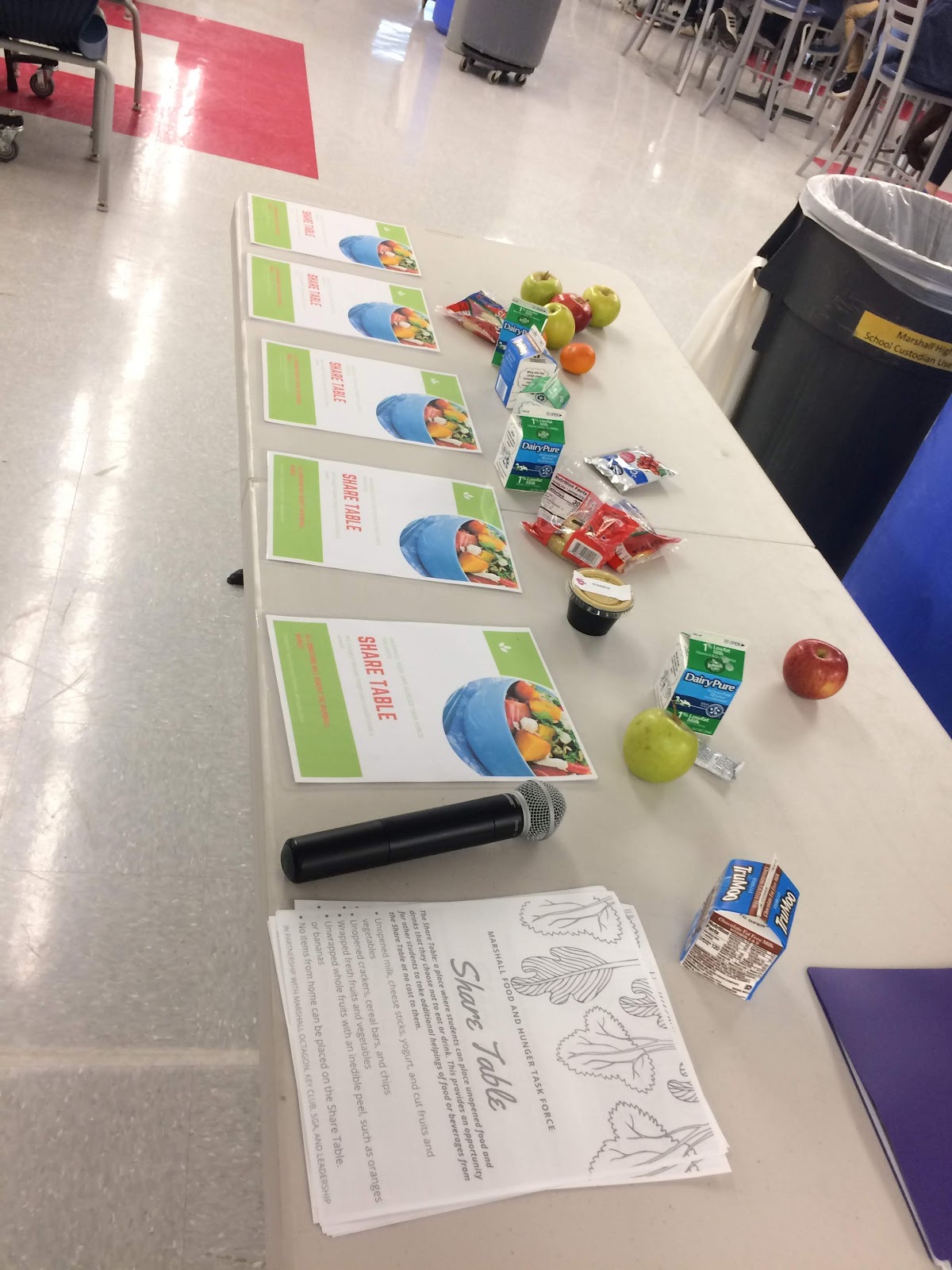 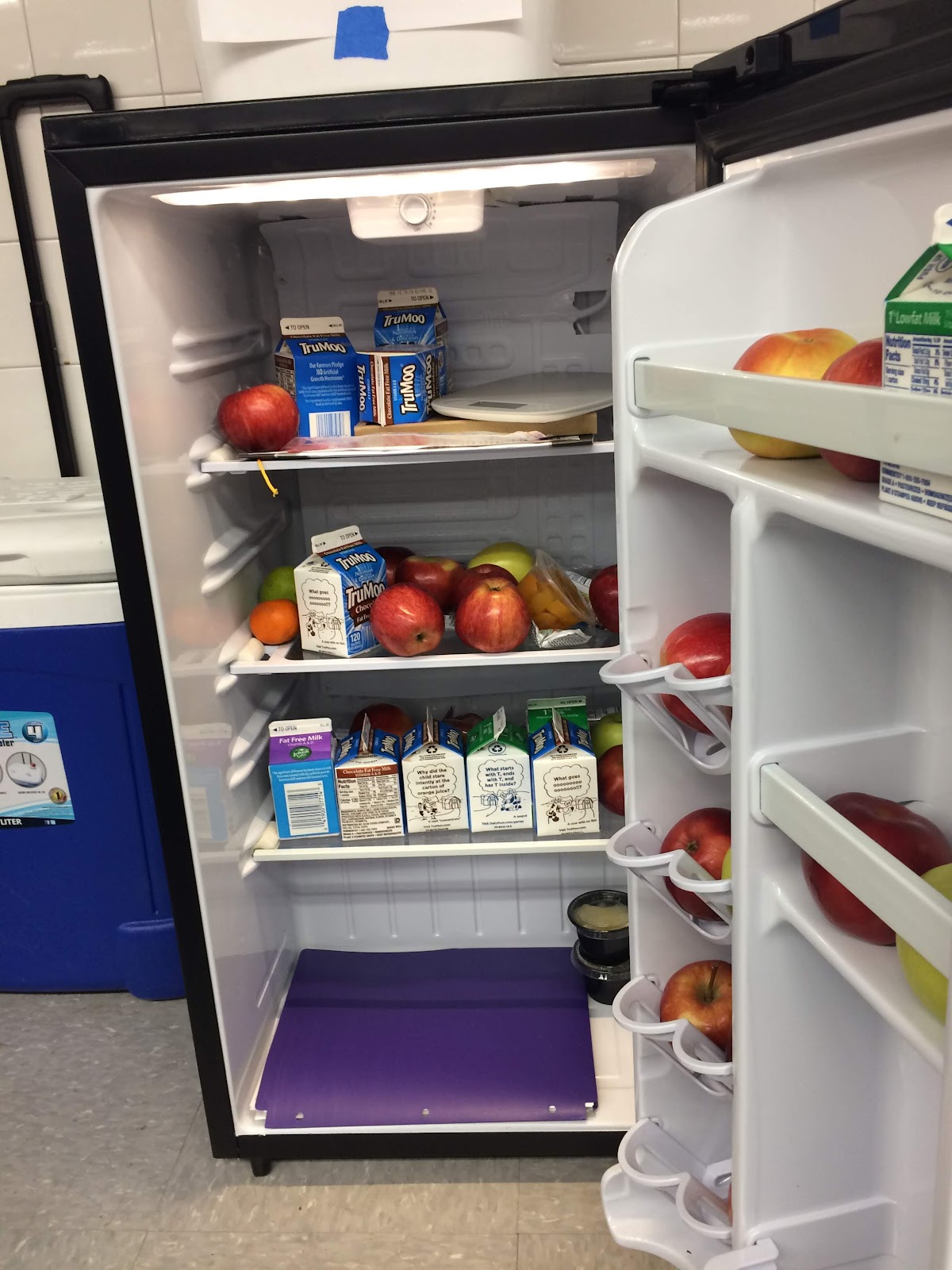 In the spring, we organized a school-wide waste audit, with recyclable and trash values in addition to food waste data. I publicized the event to the English, French, and Social Studies and National Honor Societies as well as the Octagon and Key Clubs. We recorded more than ten volunteers per lunch sorting waste and found a 30% reduction in food waste from 100 to 70 pounds, despite a higher percentage of the student body present. The involvement of several school organizations unsurprisingly led the audit to run with increased efficiency that our fall audit in which Garreth, myself, and a few others sorted a school’s worth of waste. 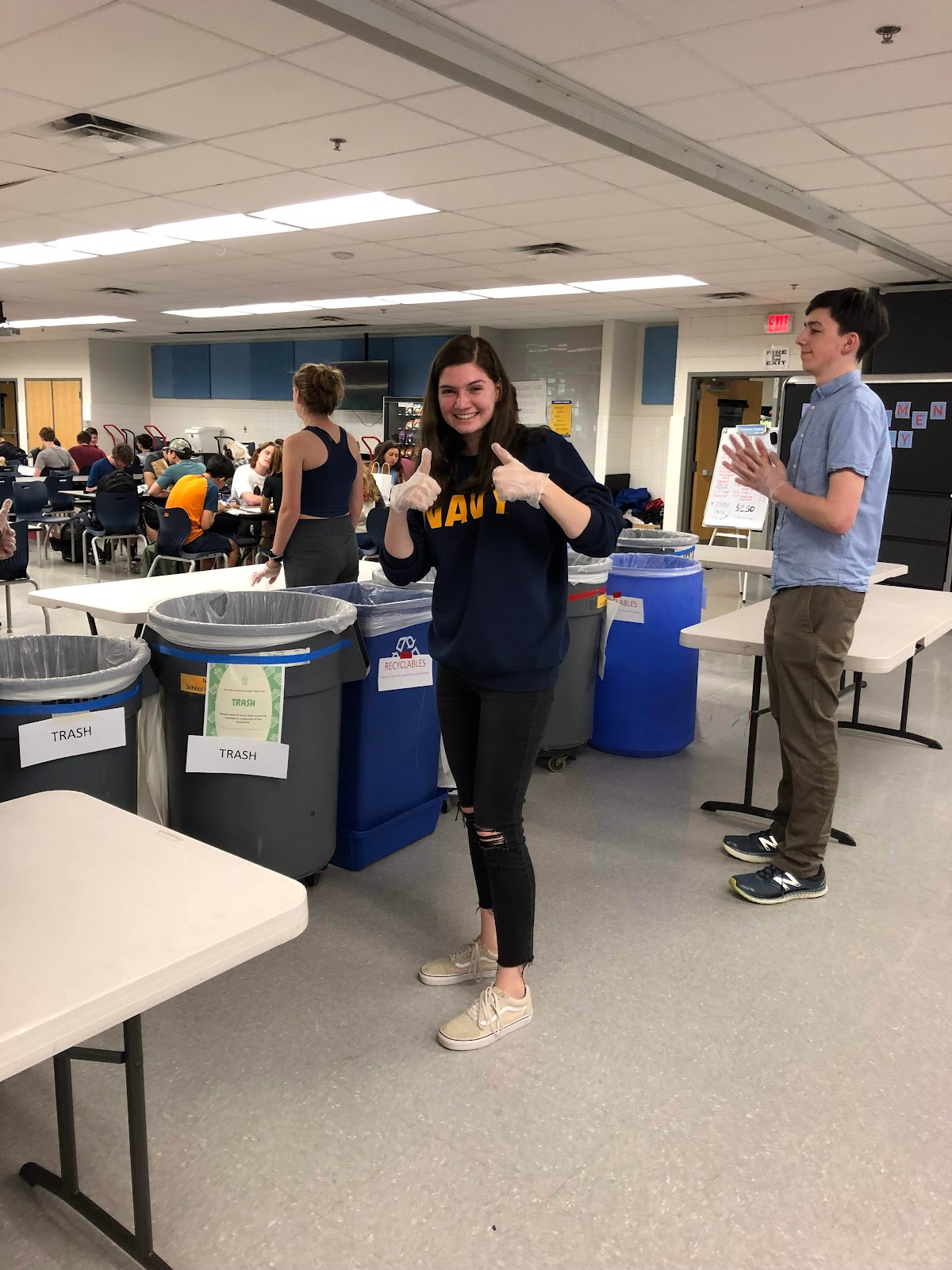 Lily Toruteva, a Social Studies and French Honor Society member, poses with our separation station in the middle of the George C. Marshall High School cafeteria.

Most of what we accomplished in our final year of high school, I never thought would be possible. We are often conditioned to accept the barriers of precedents and regulations and do not move past the initial indignation of these barriers existence. After being stymied by administration in my efforts to raise money for my friend Vivian’s relative’s charity in Mexico, I isolated my fundraising operations to Trick-or-Treat for UNICEF. Unphased, however, by County and State regulations on the activity, Garreth organized a school-wide benefit concert for the organization Food for Others to provide summer meals to Fairfax County students. The concert raised $857 for summer meals, contributing to around 8,570 meals for kids over the summer! 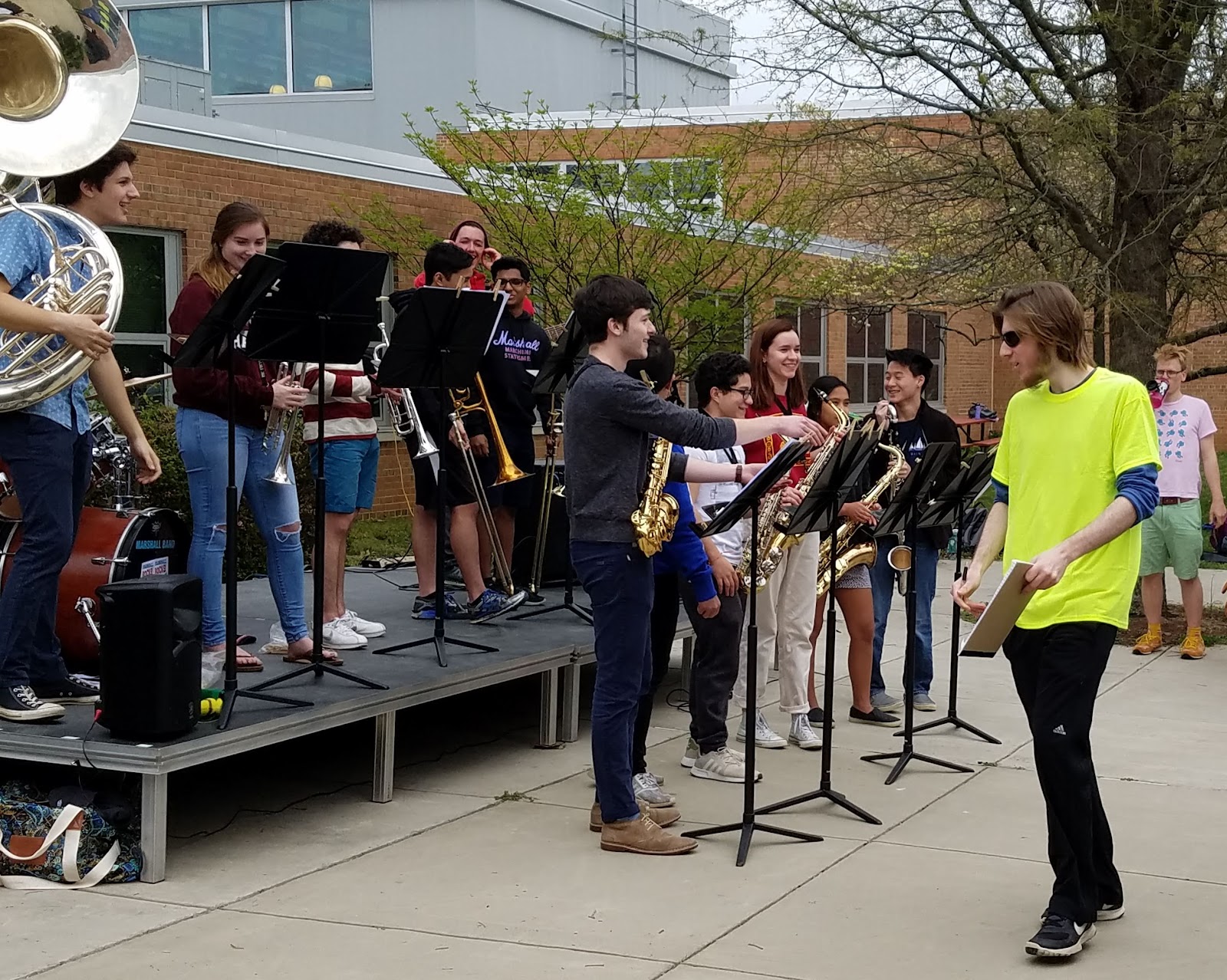 Regardless of whether you are already a leader of a club or have recently joined the environmental movement, we all have a responsibility and a role to play in preserving the future wellbeing of our planet and all that inhabit it. All issues connect to environmental issues and we must recognize the social consequences of issues such as food waste, plastic pollution, and climate change to ensure we respond to address the scale of the problems we have created. Instead of dividing stakeholders into “part of the problem” and “part of the solution,” we can unite in the reshaping of our economy and way of living in which our present use of resources does not diminish our future quality of life. Such an approach encourages citing actions, governments, and corporations that perpetuate these issues, but also provides an alternative to undesirable behavior and fosters cooperation.

Together, we can, quite literally, turn the tide. We just have to believe. 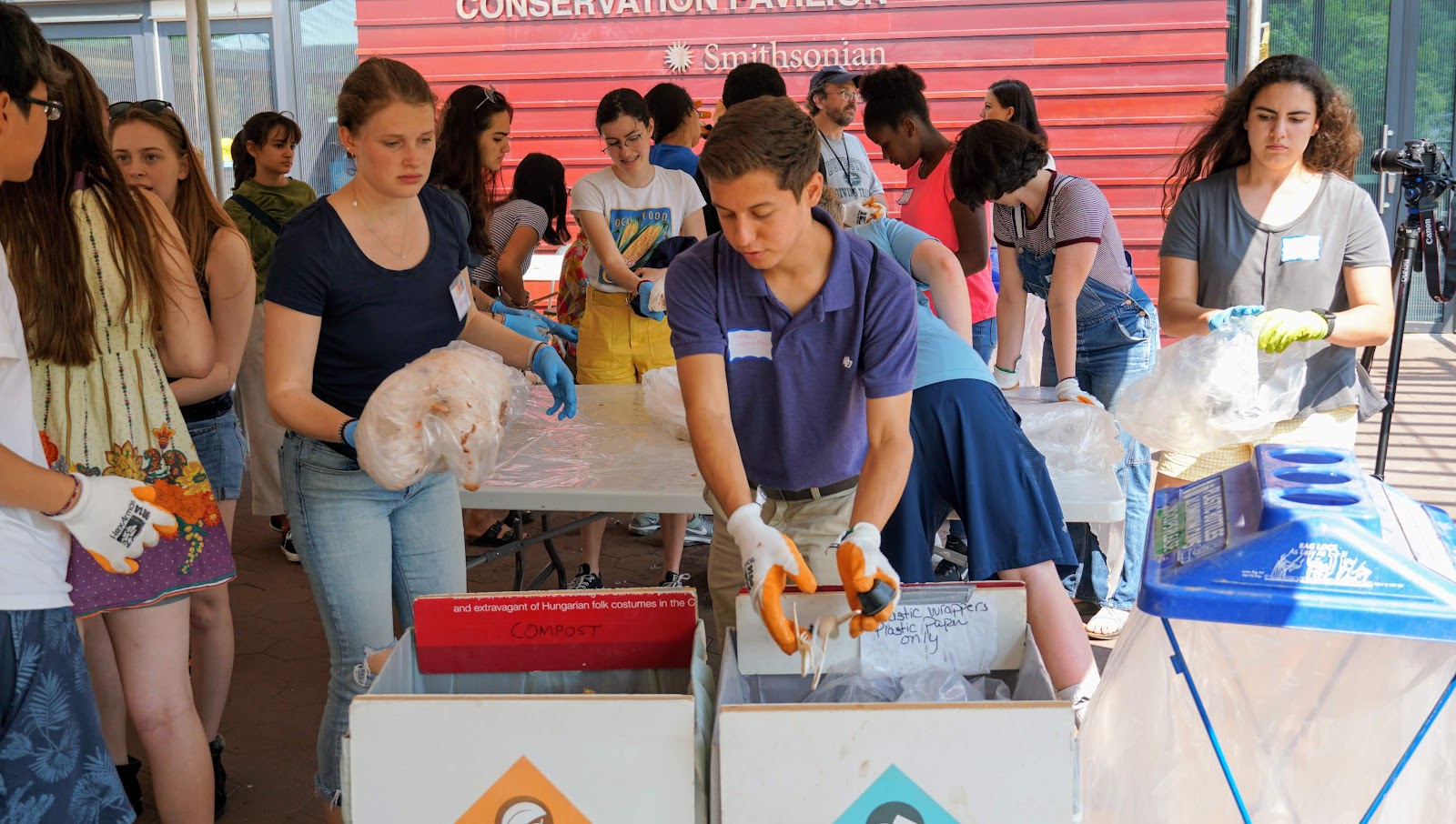